Latest news on the league standings

Top three finishes in the CCI-L 4* at Bramham and the CCI-S 4* at Chatsworth has propelled Ros Canter and Pencos Crown Jewel to the top of the EHOA league.

The league got underway at Chatsworth in May and, after the superb performances there and at Bramham, Ros and the 13-year-old mare owned by Annie Makin and Kate James have taken an early lead with a current points total of 37. Thomas Carlile (FRA) and his own nine-year-old gelding, Darmagnac De Beliard are hot on Ros’s heals at this stage of the season, just one point behind in second. They have built their score so far by finishing second in the CCI-S 4* at Chatsworth and fourth in the CCI-L 4* at Bramham.

Britain’s Heidi Coy fills the next two spots with her own Halenza and David Ottewell’s Russal Z. Heidi achieved top ten finishes in the CCI-S O4* at Houghton and the CCI-L u25 4* at Bramham with both the 10-year-old mares to leave them lying third and fourth respectively. Susie Berry completes the top five for Ireland, sitting on a score of 29 after securing top ten finished in the CCI-S 4* at Chatsworth and the CCI-L 4* at Bramham with Helen Caton’s Ringwood LB.

This exciting and dynamic new league for top level eventing on British soil is funded by The Event Horse Owners Association (EHOA), a strategic partner of British Eventing.

The concept rewards the most competitive and consistent combinations at CCI4*-S and CCI4*-L levels throughout the 2022 season. The EHOA points system, designed by EquiRatings, features a tight points distribution for the top 25 (CCI4*-L) and top 15 (CCI4*-S) finishers – plus a unique negative points structure for cross-country jumping errors which delivers the potential for dramatic changes to the series leader board on every 4* cross-country day.

With many combinations now having had at least a couple of 4* runs, the league is really starting to take shape. It will be exciting to see how it continues to change in the coming weeks and months as the rest of the season unfolds.

Don’t forget, to be eligible for the extremely ge 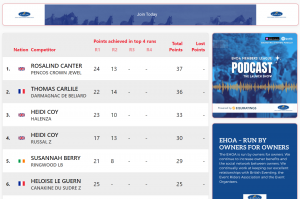 Warning: A non-numeric value encountered in /home/customer/www/ehoa.org/public_html/wp-content/themes/Newspaper/includes/wp_booster/td_block.php on line 352