I thought it helpful to give you a brief summary of the outcome of the EGM as well as my personal view of the meeting.

Guy Prest chaired the meeting with all but one member of the BE Board present.  There were approximately 130 members present, out of the 107 signatories who called for the meeting, 4 were in attendance. The members in attendance voted and in addition there were a number of proxy votes cast on behalf of those who were unable to attend.

Two motions of no confidence were put forward, one in the Chairman and the other in the Chief Executive.

The results were as follows:

Motion of no confidence in the Chairman:

Motion of no confidence in the CEO:

Therefore, neither motion was passed.

There were a number of items raised which would have been more suited to an AGM; the IT project, Osborne House, Commercial and Marketing Strategy, the under 18 Chair to name but a few.  In the event none of these were discussed at any great length and certainly not to any degree as the Chairman directed that there would be an opportunity to raise these points at the AGM on the 4th November 2018.

However, it is evident that there are some deep concerns within the membership on a wide variety of issues.  At times it is felt that the BE Board are not listening and addressing these concerns. The key points of communication, transparency and engagement are all areas that were raised.  When summing up the Chair promised that this would improve and I believe this was generally a positive outcome from the meeting.

t was noted that going forward the AGM is the correct sounding board for members to raise questions and get answers, so I urge as many of you as possible to attend the AGM. We re being encouraged to send any questions to Wendy McGowan company.secretary@britisheventing.com in advance of the meeting.

As a separate issue I would just like to reinforce the point that the EHOA is here to represent you on a wide range of issues and on a number of different boards in the sport.  In particular I would like to remind you that Mark Corbett represents the EHOA on the BE Sports Committee, this sits a number of times a year, so if there are an points or issues you wish to raise during the year then please contact Mark rawlinsfarm@me.com direct who will raise your points with the committee.

Congratulations to EHOA Board member, Alex Wakeley, his horse Cristal Fontaine ridden by Kitty King,  was crowned 6 year World Champion at Le Lion at the weekend.    Piggy French was 2nd 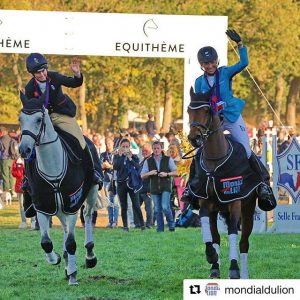 Statement from the BE CEO regarding the upcoming EGM

After receiving feedback regarding some confusion as a result of some recent posts on Social Media over the upcoming EGM, we would like to clarify the following:

If members do not attend the EGM and do not appoint a proxy (i.e. do not fill in a sign their proxy form) they will have no vote at the EGM should a resolution or motion be put forward – the EGM Chairman will not automatically become the member’s proxy.

The Chairman of the EGM will only become a member’s proxy if the proxy form is signed by the member but they do not assign their own proxy – i.e. the HEREBY APPOINT section of the form is blank. More details on appointing a proxy can be found HERE.

Furthermore, again as a consequence of some misleading posts on social media, it would not have been possible to run both the AGM and EGM on the same day as signatures calling for an EGM were received on Friday 7th September 2018; the BE Articles are clear that the meeting has to be called within eight weeks of this date which would be 2nd November 2018, two days before the AGM.

We have received a number of enquiries about the voting for/at the BE EGM.  I thought it may be helpful to outline the following:

EHOA, BEOA & ERA Response to the Statement by British Eventing of the request to call an EGM.

Following the recent statement issued by the Board of British Eventing on Tuesday 2nd October 2018, EHOA, BEOA & ERA of GB thought it would be helpful to release the wider opinion of our memberships on the notice expressing no confidence in the Chairman and Chief Executive.

Our associations fully understand the many concerns of British Eventing members and appreciate the level of feeling with regard to these issues.  However it is of the utmost importance to protect the Sport and to continue with the deliverance of a number of vitally important projects, the continued day to day and strategic management of British Eventing and the continuation and timely completion of the BE IT project.

Those that have called the EGM, in accordance with the Articles of Association, quite clearly feel strongly enough to alert BE of these issues.  We support the right of the individuals to do so and encourage the active engagement of BE members in their sport. However experience and continuity in certain areas is paramount for the Sport both with the current projects taking place and within the management at BE and at Board Level.

For any change to be executed, clear communication and transparency is vital.  To date, there has been no report on strategy or proposals for the future from the group of members calling the EGM.  This is an essential requirement for the wider membership in order to consider all the relevant facts, before reaching a conclusion.

The notice requisitioning the EGM leaves our associations unclear as to what resolution is being put to the EGM. Given the wide and varied opinions within the Sport, without any evidence based single directive, our associations are unable to form any considered views about the concerns expressed by those 107 signatories.

The Annual Dinner and Awards evening is fast approaching with just over 6 weeks to go. Tickets are selling well so please don’t assume if you book last minute you will be joining us as we are limited on numbers.

After a wonderful season and much to celebrate with Team and Individual gold within our Sport its going to be a fabulous evening, why not come and join the celebrations and applaud the medallists?

With all this in mind I have attached the Dinner Invitation and booking form for this years dinner. We will be returning to Ascot racecourse on November 22nd and look forward to welcoming as many members as possible.

Shearwater Insurance Services and Equine Construction have joined forces and are generously supporting the drinks reception which will be held in the Ascot Authority Room over looking the stunning race course. The dinner will be served at 20:15 in the Parade Ring Suite, with the Awards being presented at during the evening.

Ascot Racecourse and its board of directors have again offered complimentary tickets for racing for Friday 23rd November, for those members that are keen to enjoy at day at the races. It is the Prince’s Countryside Fund race day with a six race jumps card which will be complemented by Country Living magazine’s Christmas shopping fair. Gates open at 10:45. Please be sure to indicate on the booking form how many tickets your require. They will be available for collection on the evening.

Hope to see you at Ascot in November.

No comments to show.

We use cookies on our website to give you the most relevant experience by remembering your preferences and repeat visits. By clicking “Accept All”, you consent to the use of ALL the cookies. However, you may visit "Cookie Settings" to provide a controlled consent.
Cookie SettingsAccept All
Manage consent